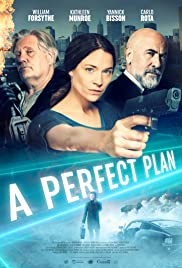 Four notorious thieves wake up in a fortified warehouse and are forced by a cunning master thief to plan and commit an extraordinary diamond heist.